The most common causes of blindness and low vision

Vision loss is not a vital problem, but we must keep in mind that over 90% of external experiences a person receives through the senses of sight. That is why we must preserve such a precious species. 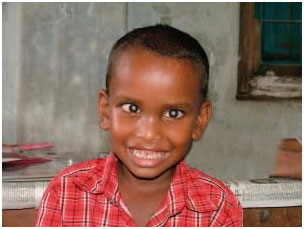 A little boy with a congenital cataract on both eyes

The global initiative launched by the World Health Organization (WHO) back in 1999, was called The right to sight, vision 2020. The main goal is the organized implementation of all measures that will prevent blindness in people around the world by 2020, with timely diagnostic and therapeutic procedures. It is believed that 80% of the causes of blindness and low vision can be prevented by preventive measures.
In 1990, the prevalence of visually impaired people in the world was 4.6% and in 2015 3.4%, which is a success because the prevalence is decreasing and the population is increasing, especially the elderly population. However, the absolute number of blind and partially sighted people is still large and amounts to 285 million, of which 39 million are blind and 246 million are partially sighted.

A blind person (according to WHO) is a person who with a better eye can count the fingers of the hand at a maximum distance of 3m, severe low vision is when vision is below 10%, moderately severe below 30% and mild below 50%. Vision is defined as the maximum corrected visual acuity in the better eye. Visual handicap is 4 times more common in countries with a low intermediate level of development compared to highly developed countries.

There is certainly a regional specificity when it comes to blindness and low vision in underdeveloped countries are the leading causes of uncorrected refractive anomalies (nearsightedness, farsightedness and astigmatism) as well as cataracts. When it comes to developing countries, they are: diabetic retinopathy with acupuncture, and in developed countries it is senile macular degeneration. 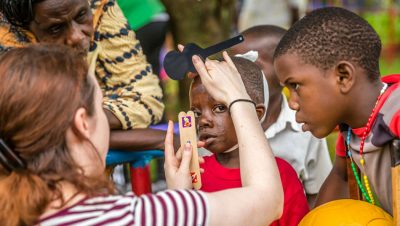 Vision testing in young children with an active approach, going to the field

When it comes to children in low-developed countries, the main cause of blindness is congenital cataract, and in developing countries, retinopathy of prematurity.

The causes of blindness can certainly be divided into those that can be prevented and those that cannot. The most we can do, and in fact it is the simplest, is to give glasses for vision correction on time during childhood. Thus, we will prevent the occurrence of low vision, and thus reduce the percentage of visually handicapped people in later life and work. In order to achieve this, timely systematic examinations of vision must be promoted starting from the earliest childhood (in the 3rd year) as well as preschool age (in the 6th year) and every year during the school period.

It is necessary to constantly promote vision examination in people after the age of 40 (when the first problem with reading appears) with an ophthalmologist. In that way, in addition to the examination of distance and near vision with the prescription of glasses, the intraocular pressure will also be measured, and the examination will be performed on a biomicroscope of both the anterior and posterior segment of the eye with pupil dilation.

In this way, we can detect the appearance of cataract-clouding of the lens, inform the patient about it and explain that the treatment is exclusively operative when the time comes for that, as well as instruct him in how to apply for surgery.

Under the organization of WHO cataract surgery is organized in various ways, there are mobile hospitals where all staff with equipment approach patients living cut off from the world such as settlements even in the Himalayas. 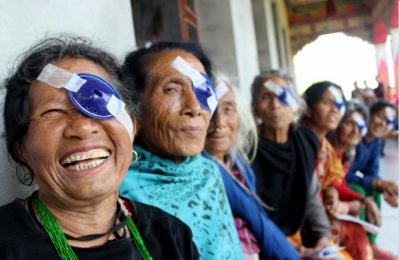 In our country, the waiting time for cataract surgery has been reduced by including private hospitals, where operations are performed at the expense of the Health Fund. By measuring intraocular pressure, we can detect the presence of glaucoma. In the initial phase, glaucoma can very easily be brought under control with the use of eye drops. This will prevent permanent damage to the optic nerve and irreversible blindness. It is necessary to advise control at least once a year, in addition to measuring intraocular pressure, it is necessary to examine-scan the optic nerve with the OCT method and determine the width of the visual field.

In order to cover a larger number of people in the world, even in our country, mass screenings are organized several times a year, which means the detection of diseases among the healthy population. Such as measuring intraocular pressure by non-contact method on public masses, shopping malls, etc.

In people with diabetes, we should work on education and promote ophthalmological examinations at least once a year or more often if necessary or if changes have already occurred. Patients must hear from competent general practitioners as well as endocrinologists that an ophthalmological examination is necessary and that only changes detected in time and treated properly provide a good outcome in terms of vision. If the changes progress, there is heavy bleeding and the development of proliferative bands, in which very often not even surgery can do much. 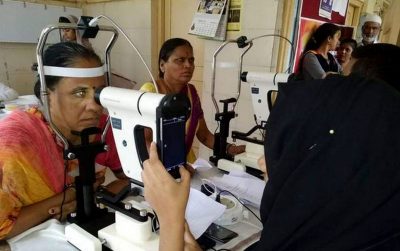 Screening of diabetic retinopathy in persons with diabetes then fundus cameras

It should be noted that middle-aged people suffer from diabetes and its complications, and a visible handicap leads to a field absence from work and premature disability, which additionally burdens developing countries such as our country. Thus, in addition to medical complications of diabetes, they are also a socio-economic problem.

In persons over 60-65 years of age, fundus examinations should be promoted, especially if there is a hereditary basis for macular degeneration or if symptoms of loss of visual acuity and additional image deformation appear. When degenerative changes in the macula are noticed in time as part of the examination of the elderly, even if a wet severe form of degeneration has already occurred (followed by fluid and bleeding), useful visual acuity can be preserved today by introducing anti-VEGF therapy.

Changes in the posterior segment of the eye can be photographed by technicians and optometrists via portable fundus cameras, and in that way the doctor determines through fundus photographs which patients require some treatment, for example in diabetics, compared to those in which only monitoring is advised. 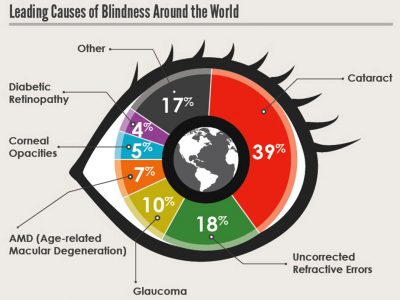 Globally, the causes of blindness in the world, the largest% are blind from cataracts and uncorrected refractive anomalies at the expense of “third world” countries

Therefore, we cannot influence the occurrence of glaucoma and macular degeneration because these are inherited diseases that are stimulated by additional risk factors, but if the disease is detected in time, progression can be prevented, and thus blindness as a final outcome, but only with regular control and adherence to advice given by an ophthalmologist.

Corneal opacities are more common in third world countries, so in those countries raising health awareness to a higher level and hygiene is a way to prevent infectious diseases of the cornea that lead to opacity and blindness. 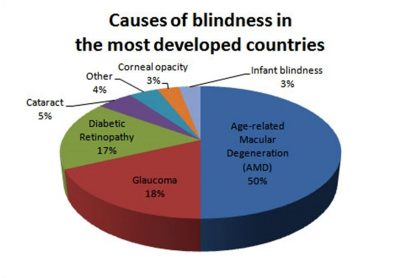 Causes of blindness in highly developed countries, the largest% of blind and partially sighted is from the degeneration of the yellow spot at the expense of increasing the share of the elderly population in these countries

We can conclude that the largest number of causes of blindness and low vision can be prevented either in their occurrence or in their development, ie progression to severe and definitive visual impairment.