Skip to content
The most difficult condition in ophthalmology – neovascular glaucoma

The most difficult condition in ophthalmology – neovascular glaucoma

How does it occur and how to prevent it?

Secondary glaucoma occurs as part of other eye diseases, and as a result they have a disorder of the formation or swelling of the aqueous humor, which results in increased values ​​of intraocular pressure and consequent damage to the optic nerve. A special place in the group of secondary glaucoma is occupied by neovascular glaucoma-NV glaucoma, which occurs as part of ischemic retinal diseases, most often after central retinal venous occlusion and proliferative diabetic retinopathy.

Retinal ischemia or hypoxia leads to the release of vascular endothelial growth factor (VEGF), which results in the growth of pathological blood vessels – neovascularization of the retina, optic disc, and then the iris called rubeosis. The neovascular membrane gradually closes the corner where the aqueous humor flows and there is a jump in intraocular pressure – IOP which does not respond or responds poorly to standard antiglaucoma drug therapy. The eye is very painful, irritating, red, watery and usually blind. In addition to eye pain, there is a headache in half of the head, often nausea and general weakness. 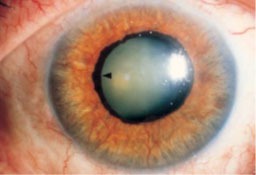 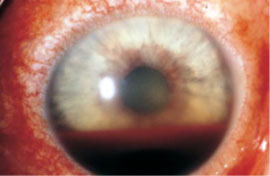 Rubeoza – neo vascularization of the iris

In addition to the two most common pathologies, namely: central venous thrombosis – “stroke in the eye” and ischemic proliferative diabetic retinopathy, the occurrence of NV glaucoma is possible after occlusion of the central retinal artery, ischemic eye syndrome in occlusion a.carotis internal, as part of intraocular growth tumor, retinal ablation primary as well as secondary after uveitis. 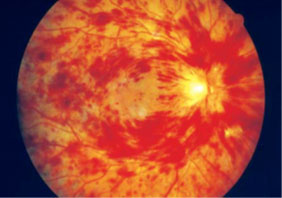 Condition after retreat after “stroke in the eye” – OVCR 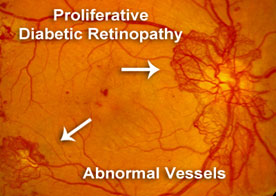 Proliferation of pathological blood vessels on the retina and optical disc

In order to avoid this most difficult condition in ophthalmology – blind and sore eye, it is necessary to contact an ophthalmologist – retinologist in time in order to make the right diagnosis and start timely and adequate therapy. The treatment consists of a combination of antibodies to Vascular Endothel Growth Factor (At VEGF) injected into the eye in the form of injections to withdraw pathological blood vessels and panretinal laser photocoagulation, which complements the action of the antibody and ensures long-term effect. In that way, we get a calm eye, stability in visual acuity and values ​​of eye pressure. 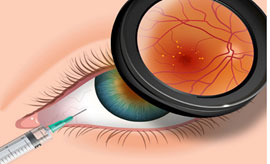 Intravitreal administration of At VEGF therapy 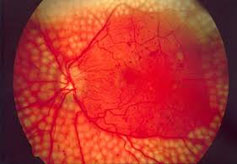 If these therapeutic methods are not applied in time and there is a jump in pressure, corneal edema, bleeding in the anterior chamber or in the vitreous, cryoanemization of the ciliary body must be performed “freezing” the eye to permanently reduce intraocular pressure.
To avoid these or similar eye problems, schedule a preventive examination and check your eyesight regularly. See you! 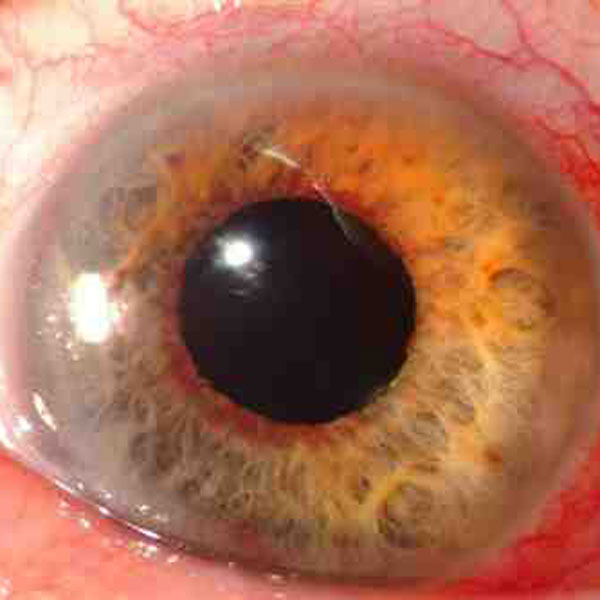