Diseases of the posterior segment of the eye are very difficult to treat, because drugs applied topically in the form of drops hardly reach the ocular background due to poor resorption through the outer shells of the eye (cornea and conjunctiva). Also, drugs that are given systemically are transported to a limited extent through the blood-brain barrier, and in order to reach the therapeutic concentration in the eye, they must be given in higher doses, thus greater side effects can be expected. It is the intraocular applications of the drug that enable the avoidance of systemic side effects, as well as the possibility of achieving a therapeutic concentration of the drug at the place where the drug should act.

However, intraocular injections require frequent use, because due to the rapid flow in chorioretine or clearance, the drug concentration falls very quickly below the therapeutic concentration level, and must be repeated frequently. A greater number of applications poses a higher risk for intraocular infections.

It is the use of biodegradable implants that can overcome these problems, because the drugs are released slowly over a number of months.

The use of biodegradable implants was started with Ganciclovir during the treatment of CytoMegalo viral retinitis followed by cytoid macular edema. Ganciclovir implant Vitasert was approved for use in 1996 in CMV retinitis, which revolutionized the toxic effect of systemically given Ganciclovir.

The next one registered in 2005 was Retisert 0.59 mg – fluocinolone, which was much smaller in size than Vitasert, so it was applied without suturing for the sclera, indicated for posterior uveitis followed by cystoid edema of the macula of non-infectious etiology. The effects on the macula were confirmed for up to 30 months, and the drug was released on a daily basis of 0.6 µg / day for the first month and then of 0.3-0.4 µg / day.

The goal was to have an effect in the longest possible interval with patient safety and as few side effects as possible in terms of posterior subcapsular cataract of steroid-indicated glaucoma.

Compared to Retisert, the next Ozurdex (Allergan) implant approved for use in 2009 has a significantly shorter effect of 3-6 months, but with a significantly lower percentage of side effects. It has been registered in macular edema as part of branch and central venous occlusion (BRVO / CRVO). 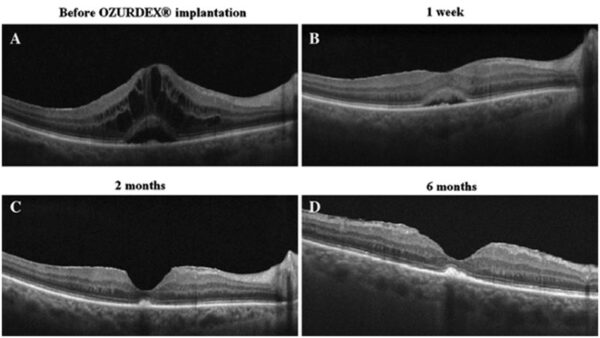 The last in the series is Iluvien – fluocinolone approved for use in 2014, leads to the release of small doses of this corticosteroid for up to 24 months and is suitable for the treatment of diabetic macular edema – DME.

In our country, the only registered biodegradable implant with a slow-release drug is OZURDEX®. 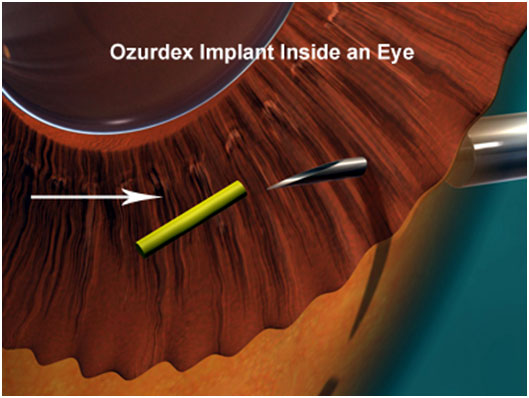 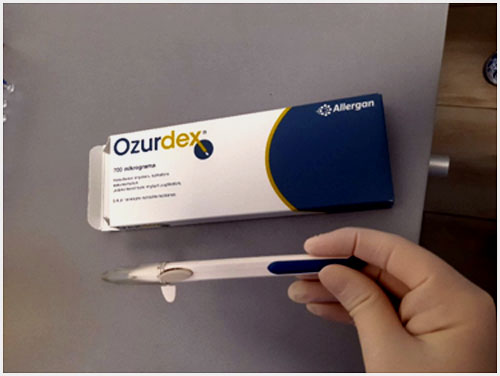 Ozurdex is an intravitreal small biodegradable implant containing 700 micrograms of the corticosteroid dexamethasone. It is applied to the inside of the eye with the help of the applicator with which it is obtained.

It is registered for use in the following diseases:

This small implant gradually releases a drug in this case a corticosteroid that acts on the internal structures of the eye macula / retina. There is no need for its extraction, and it is calculated that it will be slowly resorbed or decomposed within 6 months. From the fourth month, its effectiveness slowly begins to weaken.

Its main advantage is the prolonged effect, ie due to its characteristics, the monthly applications that we have with anti VEGF Th are avoided.

The main effect of this corticosteroid implant is the suppression of inflammation and swelling with the stabilization of the walls of blood vessels, thus very effectively reducing the swelling of the macula within the above diseases. As the swelling decreases, the patient’s visual acuity improves and remains stable for a long time.

Ozurdex should not be used in the following cases: infections of the anterior segment of the eye, fever, progressive glaucoma, open posterior lens capsules, allergies to the components of the drug.

Side effects are: IOP jump, development of glaucoma, appearance of posterior subcapsular cataract. They can cause a bacterial, viral or fungal infection to flare up if it exists in the eye. It is more suitable for use in people with already implanted artificial intraocular lenses, as well as people without a doubt about glaucoma.

The expert knowledge of Dr. Sandra Jovanović and her team is certainly an advantage in the diagnosis and treatment of diseases of the posterior segment of the eye, and therefore it is best to schedule an examination in time and check the condition of your vision.

Make an appointment by calling 066403174 or using the form on our website. 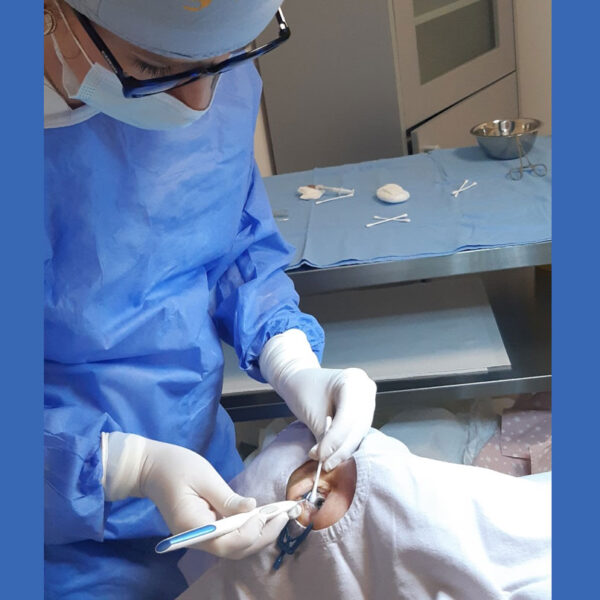